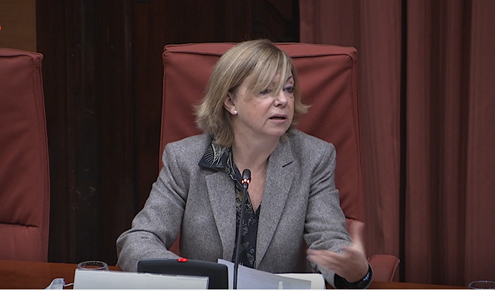 Meritxell Borràs i Solé is the new director of the Catalan Data Protection Authority, after the Parliament of Catalonia approved her designation on 10 February, and the Official Gazette of the Generalitat de Catalunya (DOGC) published it.

Borràs defended her candidacy in the Parliamentary Committee on Institutional Affairs on Monday, February 7, following the established procedure. Thus, she defended his "leadership ability, knowledge in this field of action and in data protection regulations".

In this sense, she recalled his career, with functions of maximum responsibility in the Government, the Parliament and the local level, "a world in which the APDCAT has competences". She also pointed out her knowledge of the regulations, and recalled that, as a councilor, she was responsible for the School of Public Administration of Catalonia in 2016, which, together with the APDCAT, led the training on the new General Data Protection Regulation for Catalan administrations.

Among the new lines of action as director of APDCAT were the following:

Meritxell Borràs has a degree in pharmacy (1988) and a master's degree in business management (1991) from the University of Barcelona, ​​as well as a diploma in political leadership from IESE (2010).

From 1989 to 1996, she was linked to the pharmaceutical industry, as Product Manager at Laboratorios Menarini and Laboratorios Almirall. She has been a councilor for Hospitalet de Llobregat (1996-2014), and a deputy in the Parliament of Catalonia (1996-2015). In July 2015, she was appointed Minister of the Interior and Institutional Relations. At this stage she was involved in the deployment of the Transparency Law in the Government as a whole and in facilitating its implementation to the municipalities.

Since January 2016, she has been Minister of the Interior, Public Administrations and Housing of the Generalitat. At this stage, in which the APDCAT was linked to this Department, Borràs got to know this institution closely and its work in defense of rights and freedoms in terms of data protection. In addition, from the Ministry she led the School of Public Administration of Catalonia, which promoted, together with the APDCAT, training on the new General Data Protection Regulations for Catalan administrations.

Following his appointment to Parliament and publication in the Official Gazette of the Generalitat de Catalunya, Borràs has taken office