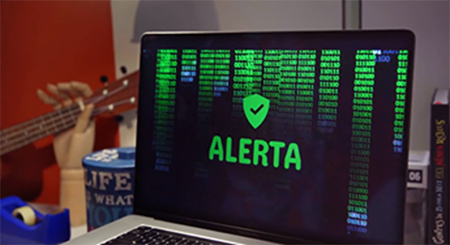 The Catalan Data Protection Authority (APDCAT) has developed a new educational resource for direct participation based on gaming, to make young people and adolescents aware of the dangers of losing control of personal data when moving online or on social networks.

"You choose!" is an interactive video game that is developed from the story of two young people who play online and compete with each other. Suddenly, they receive an alert message asking for help in recovering their personal data, which has been hijacked, along with those of other players.

Here begins the real challenge, which will lead young people to question what to do in different situations. They will have to choose one of the two options suggested in each case, in order to obtain all the parts that will make up the necessary code that will return control of their personal data.

The aim is to test young people's knowledge of the importance of taking care of their privacy, especially on the Internet and on the Internet, and to make them aware that the memory of the Internet is forever. The game aims to raise awareness through examples and actions from their daily lives, such as downloading an app, uploading photos, accepting friend requests, giving access to a computer camera, and more.

The game has been designed specially for students from 12 to 16 years old. It will be accessible on the apdcat.cat website, and will also be made available to the Department of Education, so that it can be disseminated through the Catalan telematic education network (XTEC), and reach schools.

The APDCAT, within the framework of its special commitment to raising the awareness of young people and minors on privacy issues, has developed other teaching materials available to schools and the general public, with the aim of bringing the protection of data to young people and children, a particularly vulnerable group.

The Catalan Data Protection Authority has developed a new educational resource to raise awareness of the risks of losing control of personal data in adolescence, with everyday behaviors such as downloading an app or uploading photos