Presentation of the 2016 Data Protection by Design Award 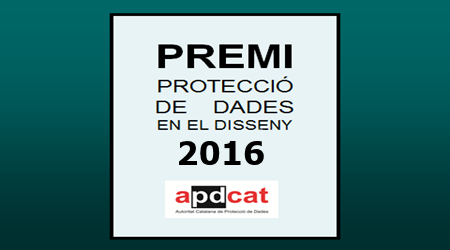 Presentation of the 2016 Protection of Data by Design Award 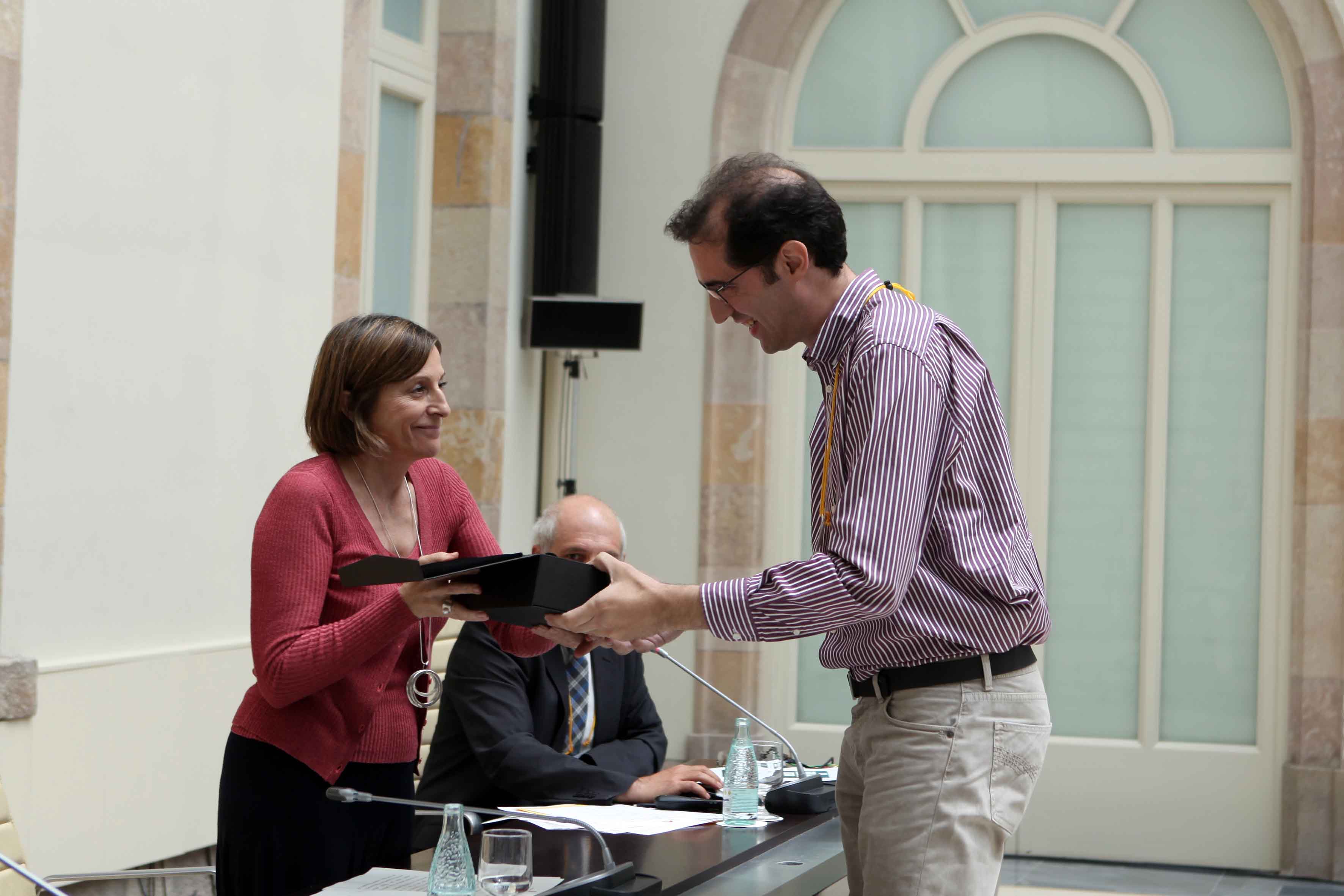 2016 Protection of Data in Design Award: UNIVERSITAT ROVIRA I VIRGILI and the INRIA RESEARCH INSTITUTE for the MyTrackingChoices application. Collecting the award: Javier Parra, researcher. 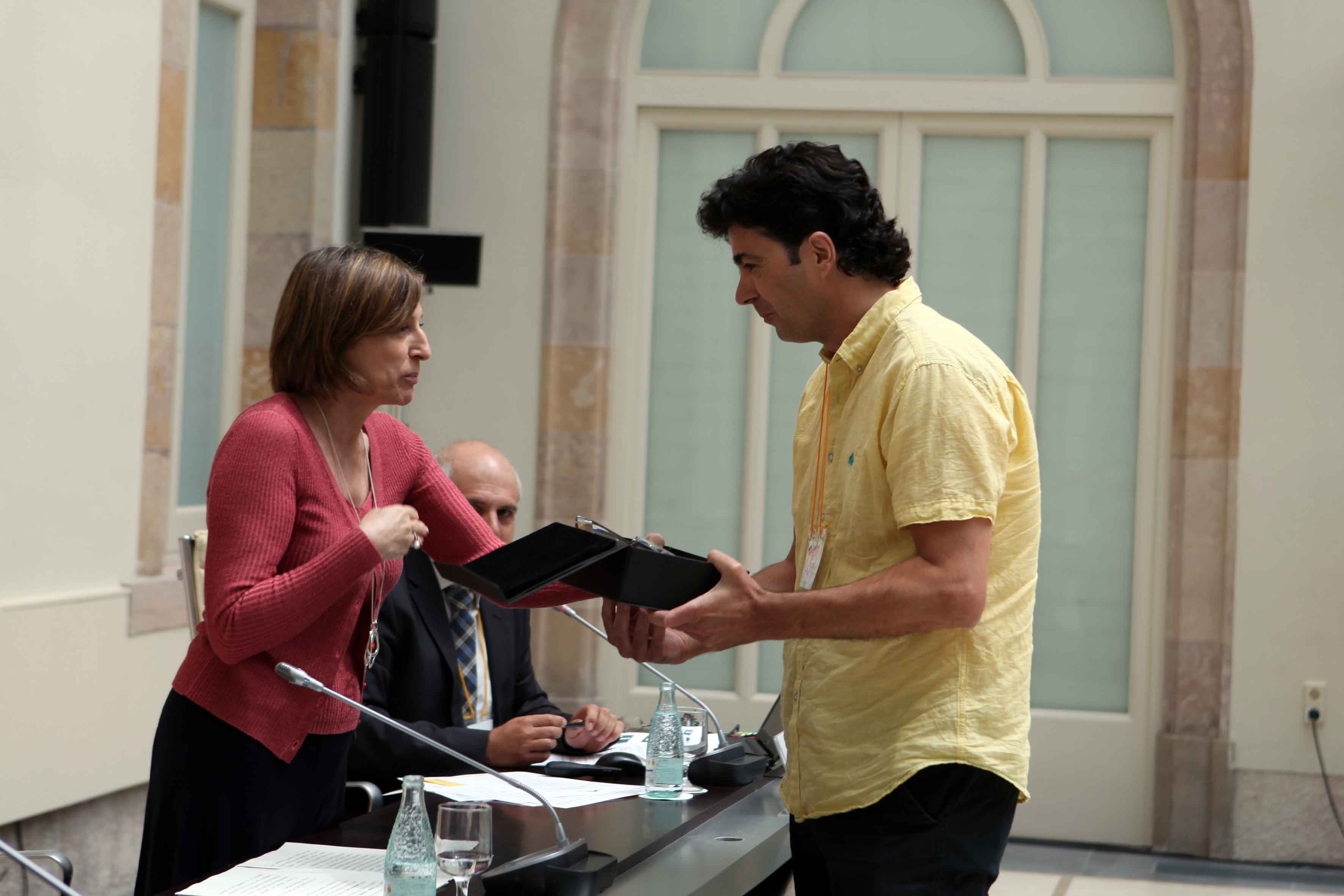 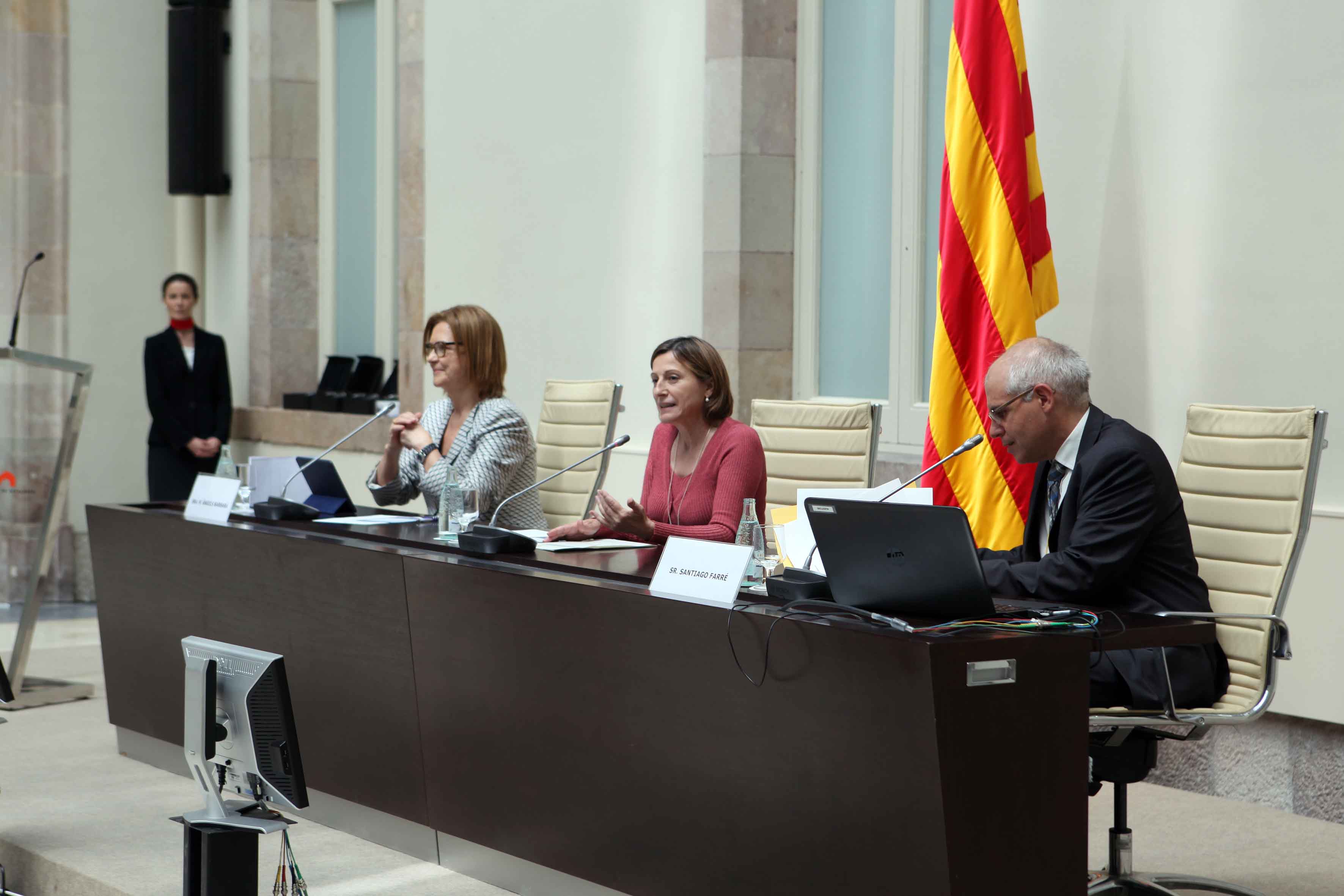 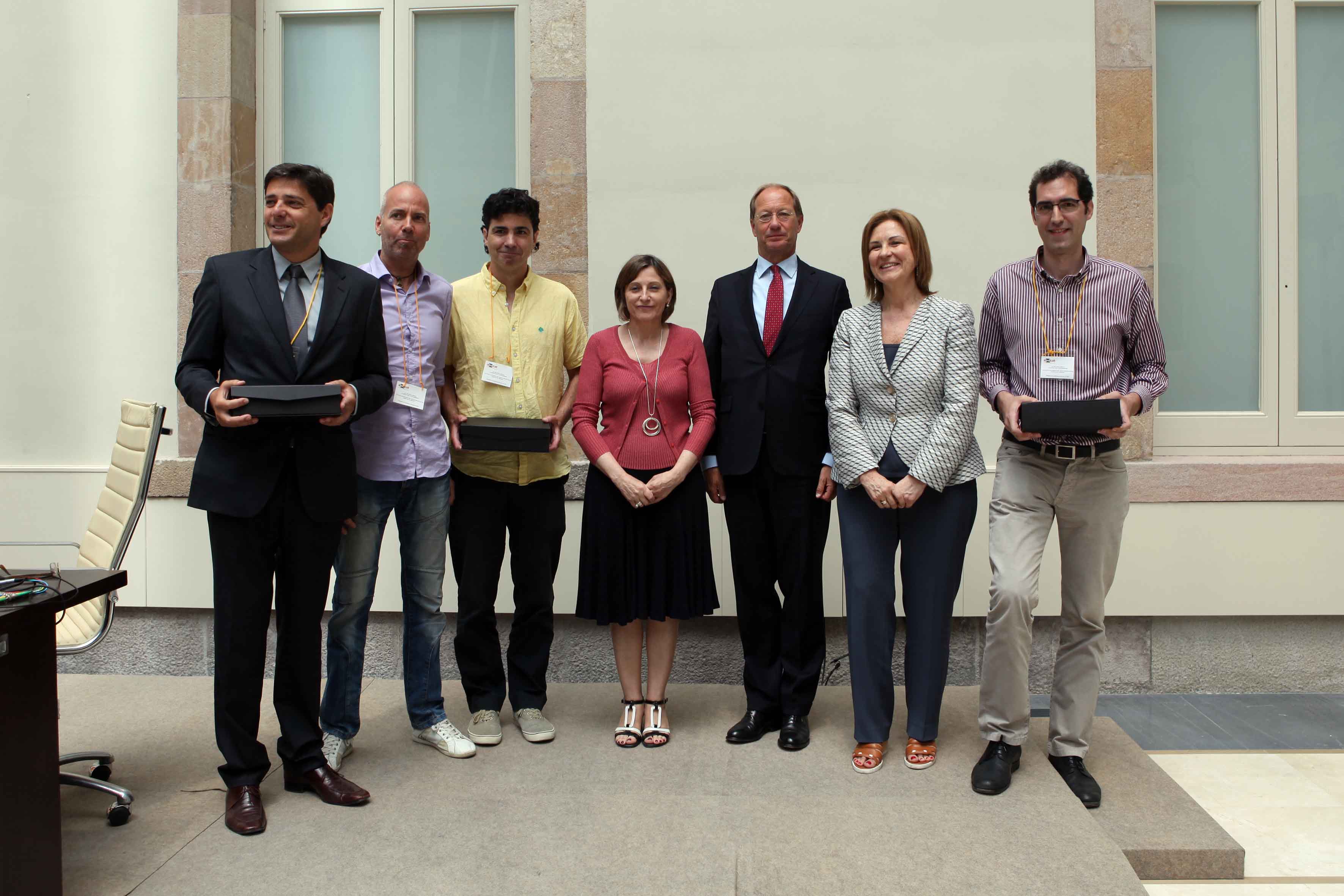 The prizewinners with the Speaker of the Catalan Parliament, H. Ms. Carme Forcadell, the APDCAT Director, Ms. Maria Àngels Barbarà and the Vice-Chairman of the Dutch Data Protection Authority, Mr. Wilbert Tomesen. 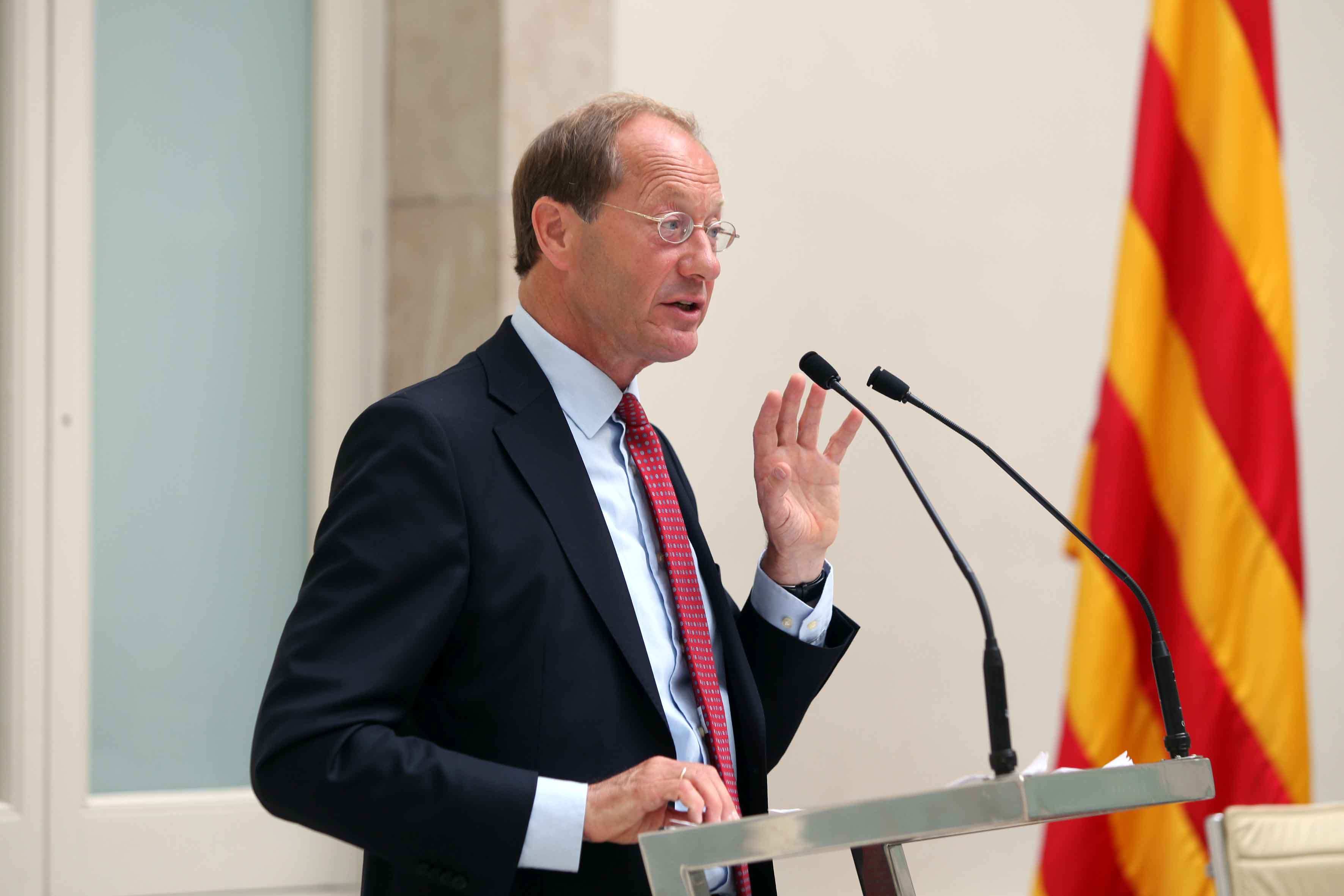 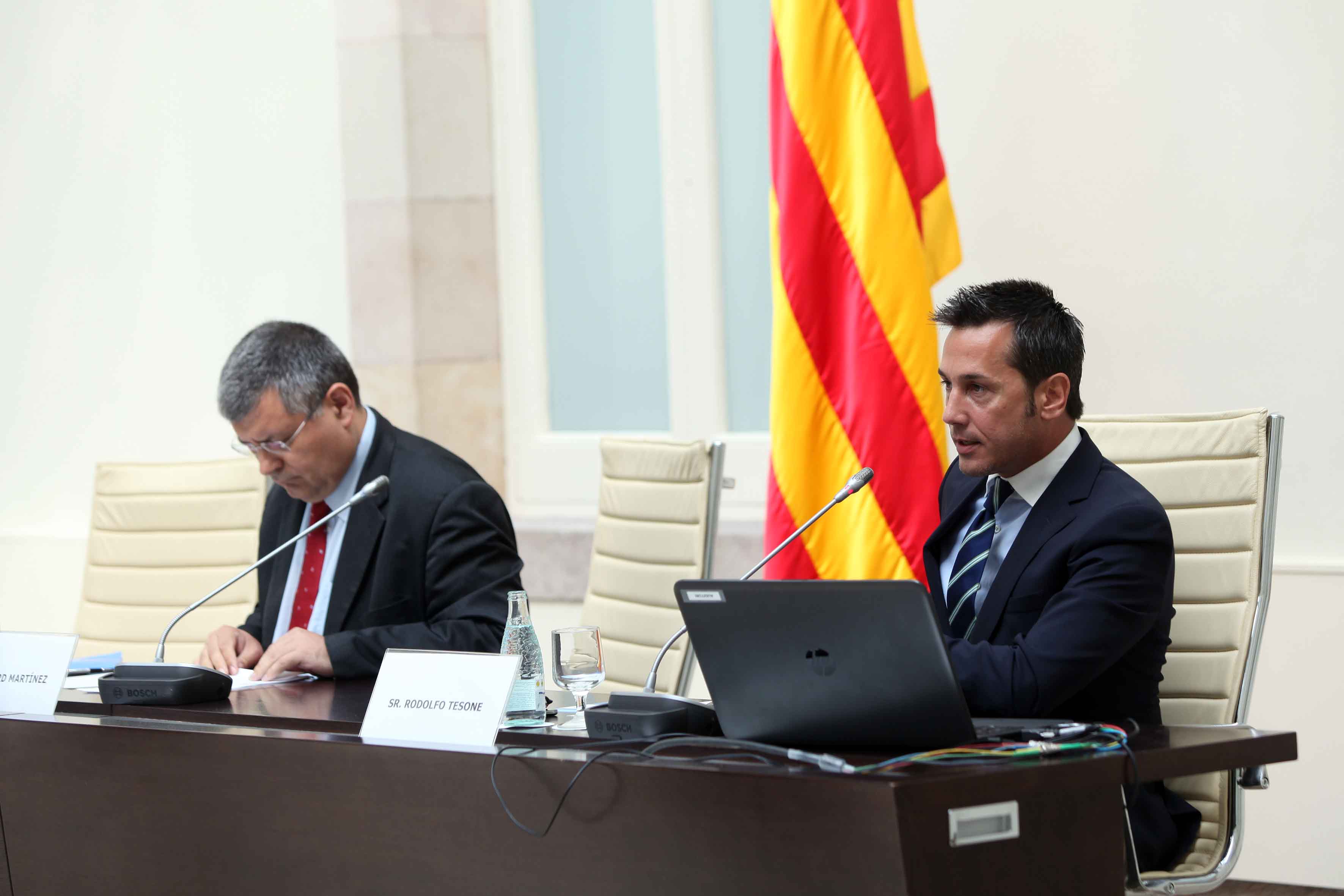 The Catalan Data Protection Authority (APDCAT) has celebrated presentation of the fourth edition of the Data Protection by Design Award. The aim of this award is to highlight the best initiatives developed in Catalonia that make responsible use of the new technologies in the field of personal data.

The prizes were presented in a ceremony held at the Parliament of Catalonia and chaired by the Speaker of the Catalan Parliament H. Ms. Carme Forcadell, in the framework of the conference entitled: The new european Regulation, a challenge for companies.

The jury of the 2016 Data Protection by Design Award decided to present this year’s prize to the UNIVERSITAT ROVIRA I VIRGILI and the French research institute INRIA for the MyTrackingChoices computer application. This is a tool which allows users to control the tracking of their activity on the Internet.

Specifically, the app, which is now available on the Chrome browser, lets users choose the categories of web page contents (health, religion, sport, etc.)  that are privacy-sensitive to them. Once set, the app allows users to see the name of advertising distributers and website trackers. If the user visits a page with content which has been chosen as sensitive the tool indicates the websites that have tracked the visit to that particular site.

The jury awarded two honourable mentions, to the following organisations:

The first, to the UK information technology company Validsoft UK Limited for their User Authentication platform, a system which combines four identification factors to access services from mobile devices.

The second honourable mention was awarded to the project entitled Preservation of statistical secrecy in the dissemination of geocoded population data, presented by the Universitat de Vic Data Analysis and Modelling Research Group, which also received support from the Statistical Institute of Catalonia (IDESCAT). The project consists in a tool to protect the publication of geocoded statistical information.

Ms. Maria Àngels Barbarà gave the opening speech of the event. The APDCAT director stressed that “the new European regulation is an opportunity for businesses, which will enjoy greater flexibility for their data processing but which will also have to shoulder greater responsibility in their processes.” Ms. Barbarà went on to say that “the European Data Protection Regulation provides the elements to make an advance assessment of data processing, which will enable companies to enhance internal management of the information. As a consequence, it will not only help improve the guarantee of privacy and thus boost user confidence, but will also better organisations’ management and competitiveness.”

Mr. Wilbert Tomesen, Vice-Chairman of the Dutch Data Protection Authority, vice-chairman of the Joint Supervisory Body of Europol and a permanent member of the Eurojust Joint  Supervisory Body, gave the keynote speech of the Symposium. This privacy expert explained that, “In our world, privacy has to be considered as part of an organisation’s socioeconomic position. We’re speaking of a fundamental right here. People have a right to careful, safe handling of their personal data. By accepting this goal of privacy, by proactively adopting the measures, organisations will be able to improve the trust and confidence of consumers and citizens in general. And trust and confidence is the very basis of our society.”

The president of ENATIC Digital Advocacy Mr. Rodolfo Tesone, and the former president of the Spanish Professional Privacy Association (APEP) Mr. Ricard Martínez, also spoke during the event to outline how ICT companies can approach application of the new Community regulation.

Rodolfo Tesone referred to the extent to which companies’ continuity depended on their complying with the obligations set out in the General Data Protection Regulation and the opportunities for business growth that may arise by applying policies and processes of digital regulation compliance and 360º Privacy. He also addressed the requirements and solutions to be embraced to better adapt to this new regulatory framework.

During his address, Ricard Martínez drew attention to the fact that “this regulation provides us with a guide, a way forward that can turn our companies into producers of trustworthy and safe technology; that can turn our economy into one which is both digital and competitive, on the basis of the ethics of human rights".

The APDCAT would like to congratulate the award winners in the 2016 edition and to express our thanks to all those who presented entries.